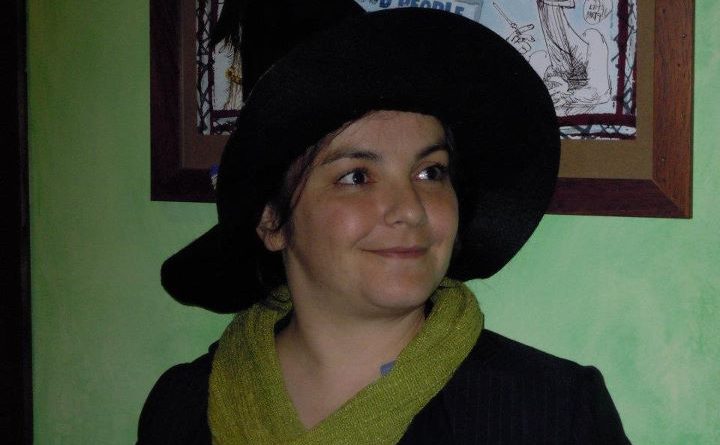 My name is Francesca Morbidelli, I live in Firenze, Italy. I’m a beer writer, taster, educator and a beer judge. 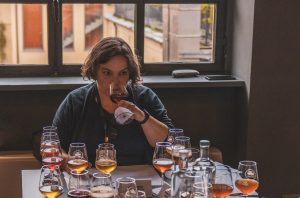 In 2006, with some friends, I founded the Beer Tasting and Homebrewers Association “La Pinta Medicea”. At that time, the Italian beer scene was rather desolate, we were the first ones in Florence (and there were very few of us in Italy) to organize homebrewing lessons, meetings, as well as other events (dinners, tastings, markets, public presentations and online articles), all aimed at publicizing and spreading the Italian craft beer culture.

Over the past ten years, I have attended any tasting courses that were available (or possible) in Italy: MoBI, Unionbirrai, Slow Food, Fermento Birra and even at our Pinta Medicea when we had guest teachers. I attended the lessons of the best beer experts in Italy: Lorenzo “Kuaska” Dabove, Flavio Boero, Leonardo di Vincenzo, Agostino Arioli.

Since 2008 I have been running a pretty popular website about “quality beer culture”: www.pintamedicea.com. I am probably the first Italian female beer blogger. I write and edit all the articles and sometimes I translate, too – to name a few, I have worked on the Italian translation of articles written by-or regarding Charlie Papazian, Sam Calagione, Randy Mosher, Lotte Peplow (the current Brewers Association’s Craft Beer Ambrassador in EU), for example. I helped to write the lecture notes/handouts for all Unionbirrai beer education courses. I contributed extensively to writing the lecture notes/handouts for the beer education courses held by Unionbirrai. I have also produced some small reviews for various beer guides, for example the Mobi “Guida ai locali birrari”.

I currently teach beer tasting and beer history/culture, and I have offered several public presentations many times; here the one on April’22. I have organized many beer courses in Florence for Pinta Medicea, and also for Unionbirrai.
I was hosted at some local tv shows to talk about beer (a really terrible picture).
Every year in August I usually volunteer at the Bière sans Frontières stand at GBBF London, to present Italian craft beers to the English public. I’m a (proud) CAMRA member.
You can find out more info and pictures about these activities on my website pintamedicea.com.

I have been selected and have participated as a judge for many beer competitions since 2008/2009, thus acquiring the necessary expertise to take part to any future events on a wider scale. I’ve been a judge 11 times at Unionbirrai‘s competition Birra dell’Anno, (and Birra dell’Anno Winter Edition) plus at dozens of other homebrewing competitions, including: Una Birra in Versilia, Il Villaggio della Birra (many times, here 2022 edition), IGA Beer Challenge, Birra Dell’Anno Winter Edition, the World Beer Awards, Premio Cerevisia on Perugia University, (the other) Cerevisia–contest of artisanal beers from Trentino, some stages of the Italian MoBI championship and many others. Moreover I was summoned by the American Brewers Association to judge at the World Beer Cup 2020, which was supposed to take place in San Antonio (Texas) in April 2020. Unfortunately it was canceled because of the pandemic; I am so sorry it would have been a great honor to be a part of the jury.

In 2022 I was a judge in the national beer competition Premio Cerevisia 2022, organized by the University of Perugia and in August at The World Beer Awards in London, UK. In September I judged at Villaggio della Birra, and in October at IGA Beer Challenge in Turin.

This website uses cookies to improve your experience while you navigate through the website. Out of these, the cookies that are categorized as necessary are stored on your browser as they are essential for the working of basic functionalities of the website. We also use third-party cookies that help us analyze and understand how you use this website. These cookies will be stored in your browser only with your consent. You also have the option to opt-out of these cookies. But opting out of some of these cookies may affect your browsing experience.
Necessary Sempre abilitato
Necessary cookies are absolutely essential for the website to function properly. These cookies ensure basic functionalities and security features of the website, anonymously.
Functional
Functional cookies help to perform certain functionalities like sharing the content of the website on social media platforms, collect feedbacks, and other third-party features.
Performance
Performance cookies are used to understand and analyze the key performance indexes of the website which helps in delivering a better user experience for the visitors.
Analytics
Analytical cookies are used to understand how visitors interact with the website. These cookies help provide information on metrics the number of visitors, bounce rate, traffic source, etc.
Advertisement
Advertisement cookies are used to provide visitors with relevant ads and marketing campaigns. These cookies track visitors across websites and collect information to provide customized ads.
Others
Other uncategorized cookies are those that are being analyzed and have not been classified into a category as yet.
ACCETTA E SALVA
Powered by